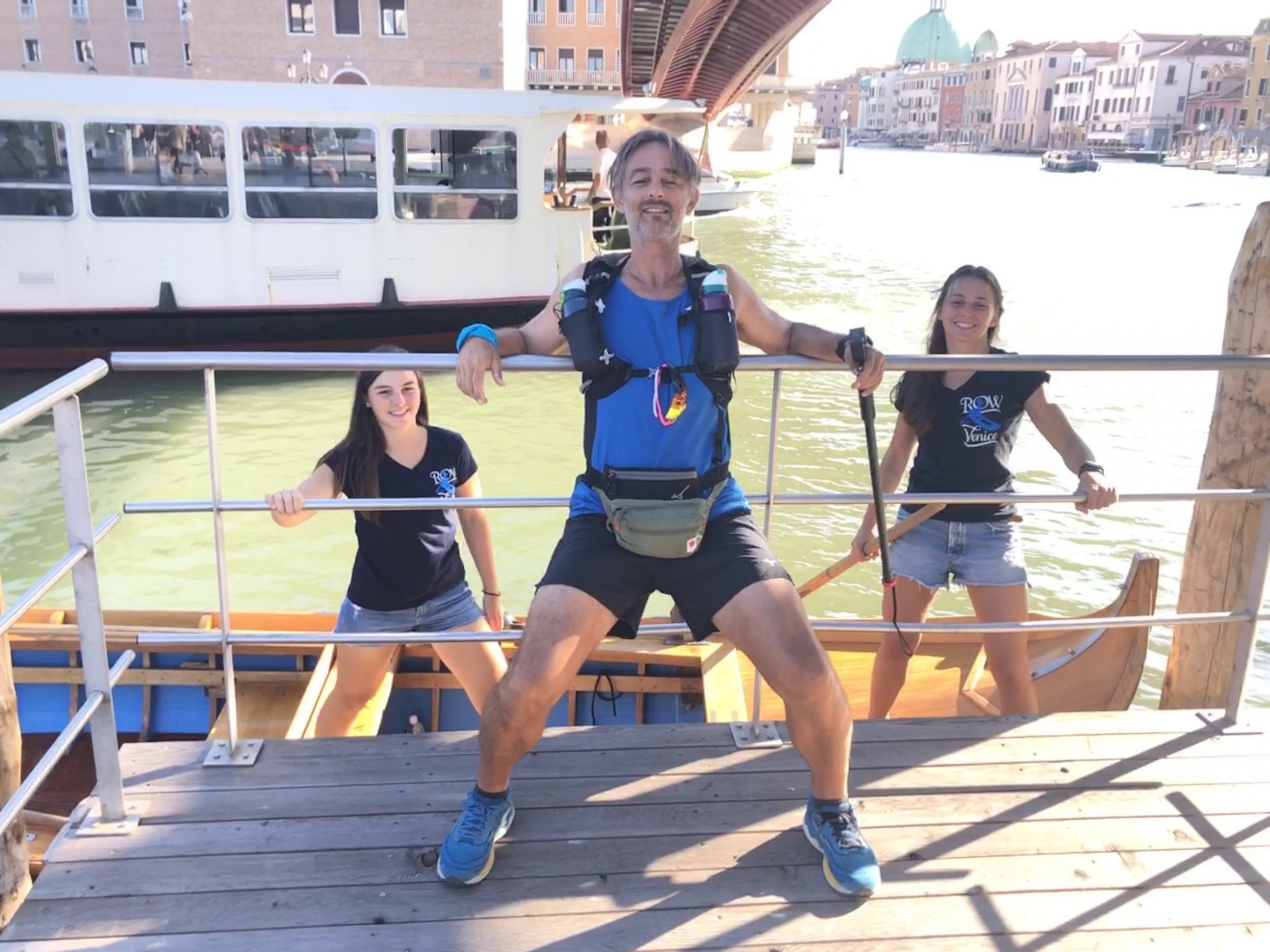 The journey the ultramarathon runner, actor and activist Agis Emmanuel started from Athens to Glasgow for the UN Climate Conference in November 1st continues with undiminished intensity in Venice, proving that Agis may be one man but thousands of others stand by him in this climate Odyssey!

After the first 200km to Patra, where residents of the areas he was passing from ran with him, the Vice-Regional Governor of Western Greece, Fokion Zaimis, ran together for 10klm to see him off to Italy. The historic city of Venice, the symbol city of Italy, which in recent years has been severely affected by the climate crisis, warmly welcomed Agis on the 17th of August with the presence of many environmental associations and organizations, which were activated by SUMUS, a dynamic citizens’ movement aiming at the sustainable regeneration of Venice, «The message that Agis will bring to COP 26 is that we need to act soon, we certainly need to reduce the amount of CO2 emissions, but we need to redefine the values system, both individual and collective, only in this way we can achieve a real reversal of the trend. To do this we need to unite: We are here», said Giovanni Leone, founding member of SUMUS; while his action was also broadcast on Italian television. At the same time, the arbitrary meeting with the Impact Revolution kids who arrived in the city from Germany, after having walked to Venice collecting plastics on the route as part of an awareness campaign, marked the passing of the baton of the climate race from South to North.

On the 19th, Agis left St Mark’s Square and ran up to the Accademia Bridge, where he was escorted by people in a traditional wooden boat, up to Piazzale Roma, where a group of people were waiting for him to run along the Ponte Della Libertà.

His meeting with the mayor of Vizenza led to a constructive discussion about his trip and especially about the destination and the message it conveys. As Agis proceeds, he collects the requests of the local communities he encounters, thus creating a map of the continent’s local hotspots.

Speaking about his journey so far, Agis notes: “Today I complete twelve days since the beginning of the action. Already in Venice, we had great success, since it is a city directly threatened by climate change. The action has been widely broadcasted on television and today on RAI. As of today completely alone, apart from the warm reactions on Fb! As I move on every day and every marathon I leave behind makes me stronger. It matters little how many dimensions and material things I gain in comparison to what I gain from the “journey” and “Ithaca”. “To Glasgow my sisters, to Glasgow”, this is all that circulates in me in this 80-day Odyssey”.

Agis’ next stops in Italy are Verona, Desenzano, Brescia, Brescia, Bergamo, Milan, Novara, Santa Maria, Turin and then from Montane, he will continue through France, Belgium, and Holland, where he will board in Rotterdam for Great Britain to finally arrive in Glasgow.

“Agis’ journey is an Odyssey – both his own and all of humanity’s – and in spite of being “Nobody” – Outis, the anonymous one – he has a thousand faces: those of all of us”, added Giovanni Leone of SUMUS.

Agis Emmanuel, actor, ultramarathon runner and activist, started on 11 August from Athens a 2421 km (60 Marathons) ultramarathon to finish on 1 November in Glasgow, where the UN Climate Conference, the most important since the historic Paris Conference, begins. World Human Forum has supported Agis’s action for climate and a more sustainable future from the very beginning.